As The Orchards Golf Club in Washington, Michigan continues to mourn the recent passing of Founder and President Ronald K. Dalby, who died unexpectedly, but peacefully on December 8, 2017, Jeff Stalcup, PGA professional and director of golf at The Orchards, said Dalby’s passion remains a guiding force as the popular stop in the far-northern-suburban-Detroit-area celebrates 25 years this summer.

Community and media members who were present at the grand opening 25 years ago are among those invited to a special event celebration on Friday, July 20, 2018 to commemorate the quarter-century milestone.

“We just want to get everybody back together, including the media that helped let everybody know we were here, and those who have come to our course over the years,” Stalcup said. “It’s a celebration, a day to have fun and say thank you.”

The Orchards is a public venue and cornerstone of the nearly 525-acre residential and golf community, featuring a classic-Robert-Trent-Jones-Jr.-design that has played host to three Michigan Open Championships and a U.S. Public Links Championship event throughout the years. 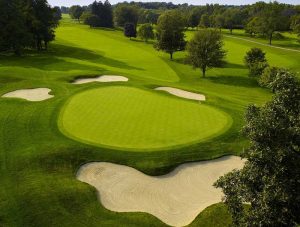 Opening in 1993 with a state-of-the-art practice center and the modern-Jones-design that received awards and accolades, The Orchards has remained one of the top public venues in Michigan. The United States Golf Association, or USGA, chose it as a site for the U.S. Public Links in 2002, which was won by Ryan Moore—now a top player on the PGA Tour. The Michigan PGA also administered the Michigan Open at the Washington-based club from 2011 to 2013.

Dalby, who guided the direction of the facility as president, told the media at the grand opening nearly 25 years ago that he wanted to have a golf course where people felt welcome and were treated special, as if they were members of the club that day. Dalby also said he wanted it to be like the private clubs of the 1920s: only open to the public who wanted a great golf experience. Jones was on board with Dalby’s desires and it is reflected in the sweeping, classic style of the course design.

“The Detroit metropolitan area is blessed with some of the greatest golf courses in the nation, yet they are limited to play by their members and guests,” stated Jones, which still appears on The Orchard’s website. “My goal in designing the Orchards was to create an outstanding public golf course, which would provide golfers with an enjoyable, yet challenging round that is a true test of golf.”

Since the passing of Founder and President Dalby, the Dalby family and The Orchards management team have continued to oversee the course and clubhouse operations adhering to the original founder’s high standards, business practices, and deep respect for the game.