Jake Kneen, White Lake-native and former Michigan Junior Amateur Champion, became the sixth amateur player in history to win the Michigan Open Championship at Grand Traverse Resort and Spa during the 2018 event.  Kneen, who noted it was one of the grittiest rounds in his life, overcame a triple-bogey bite from the Jack Nicklaus-designed 16th hole on The Bear. 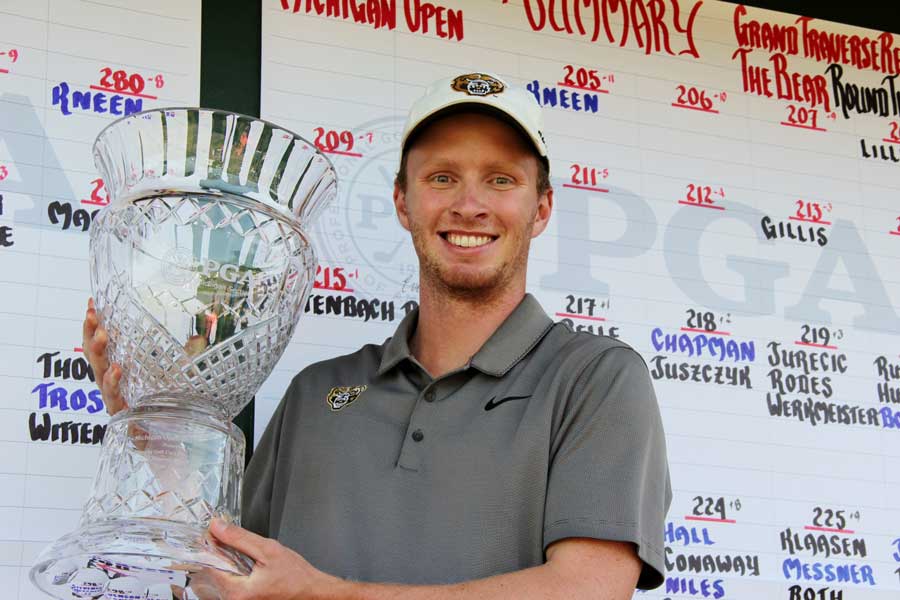 “Wow. I think I had six birdies, six bogeys, and a triple [bogey],” Kneen said. “Man, it was up and down today. I just kept my head down and kept fighting.”

“I knew I still had the lead after the triple at 16,” Kneen said. “I just kept telling myself, ‘you are still ahead, just make some pars and steady out the round.’ Fortunately, I was able to do that.”

Kneen was not only the sixth amateur in history to win the state event, but also was just the second amateur to do so in the last approximately 43 years, with Grandville-native Tom Werkmeister’s win in 2013—breaking a streak of 38 wins by professionals. Due to his amateur status, Kneen received a $750 golf shop certificate for his first place finish, while the $8,000 first-place check from the larger $55,500 purse went to the runner-up: Holley.

Holley said one a course like The Bear, golfers can’t be too aggressive.

“I had to stick to my game plan and that helped me. [Kneen] played good golf. He probably wants to forget about hole 16,” Holley said. “If he made pars the whole week on 16, he probably would have won by 20.”

Kneen started the day with a three-shot lead on Eric Lilleboe and a five-shot lead on Holley, before distancing himself as far as six shots after two birdies on the 9th and 10th hole.

“The big lead he had at the end of the day helped him,” Holley added.

Kneen, who was also recently named the Horizon League Golf of the Year for Oakland University, noted the win meant a lot and really validated the work he has put in.

“This is one of the biggest tournaments of the year for me personally, and it also validates what I want to do,” Kneen said. “My dream is to be a pro and winning a tournament like this shows that it is not outrageous that I want to do that.”

Other golfers in the field, such as PGA Tour player Tom Gillis—who is looking to the PGA Tour Champions and the age of 50 years in five weeks—closed the tournament with a score of 70 for 283 points and third place overall. Michael Nagy, mini-tour player hailing from Manistique, tied with Michigan State University-golfer Andrew Walker of Battle Creek for a shot of 68, 284 points, and fourth place. Eric Lilleboe of Okemos also tied with Ian Martin, amateur from Saline, for 285.

Looking ahead, Kneen will play in the Michigan Amateur Championship at Country Club of Detroit on Tuesday, June 19; and plans to turn to professional play in the fall. Kneen said while he had his anxious moments in the final stretch of the last round, he would prefer leading instead of chasing.

“I mean, if you can make a triple and still lead, that’s a good thing,” Kneen said.

Kneen also noted Grand Traverse Resort’s flagship course, while he had never played it until the one practice round, fit his eye.

“I love it. It’s a tough golf course, but it just looks great to my eye and sets up for my shots,” Kneen said. “I think playing this course helped me. I had to really concentrate on each shot and what I was doing, because it is so tough. I didn’t worry about what everybody else was doing.”