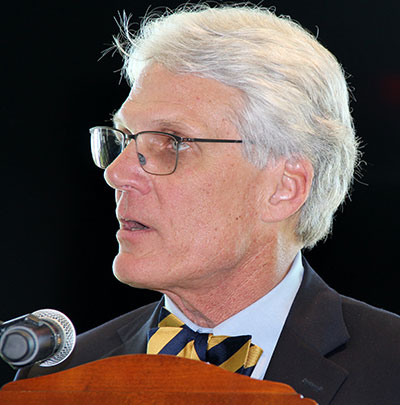 The Golf Association of Michigan Executive Director David Graham announced his retirement as of the end of June, 2019 at a recent GAM Annual Meeting of Delegates at the University of Michigan Golf Course. Then he had to face the ribbing from colleagues about it not being possible to play more golf in retirement.

“I’m laughing with them,” Graham said. “When I was hired as the executive director, I described it as my dream job and over all these years, it truly has been.”

Graham will retire after 18 years leading the GAM, which will make him the longest tenured executive director in the organization’s history. The not-for-profit organization, which was founded in 1919, serves as the governing body for amateur golf in the state and represents, promotes, and preserves the best interests of the game. Graham joined GAM in 2001 when the organization experienced some financial turmoil.

“[Graham] started with the GAM when the organization was struggling and deeply in debt,” said John Barbour, outgoing president of GAM and native of East Grand Rapids. “The search committee then had the good sense to look outside the golf industry for a business executive with a strong marketing background. Today, the strength of the GAM is a testament to that decision, and to the leadership capabilities [Graham] has demonstrated.”

Barbour served as GAM President from May 2017 to this past week, May 2018, when he passed the torch to Sara Wold of Ann Arbor. Wold praised Graham in her remarks at the annual meeting as a strong, dedicated leader who accomplished great things for Michigan golf.

“Replacing him will be very difficult, but he has shown us the type of leadership we need,” Barbour said.

During his tenure, Graham has overseen a range of projects such as new member benefits like Swing & Save, the creation of GAM Golf Days, the development of Net Tournaments for the average competitive golfer, and the building of many sponsor partnerships. Under Graham’s leadership, GAM made technology upgrades in support of the GAM website, implemented the USGA GHIN Handicap System and Tournament Management software, and established the 501(c)(3) nonprofit GAM Foundation.

The GAM Foundation funds the landmark Youth on Course program allowing young golfers to play for $5 or less at participating courses.

“Our finances are strong, our relationship with our members continues to be strengthened as their numbers continue to grow, and our Foundation is off to a wonderful start particularly with the launch of the Youth on Course program,” Graham said. “The GAM is truly positioned to serve golf in Michigan and take the game to even greater levels of participation.”

Graham said he will continue to stay close to those at the GAM, and become a part of its volunteer force.

“There’s some pride in what has been accomplished, but also a desire to be part of the impact of the association if only in a small way,” Graham said. “I’ll play a little golf, too.”