Vacationers and residents in Traverse City have flocked to the area’s famed fairways in the summer for decades. For about the last 10 years, the Traverse City Microbrew and Music Festival has taken an additional role in highlighting the area’s attractions in order to create a perfect pairing: local, quality brews and what some consider the best golf in Michigan. On Aug. 11 and 12, the festival will kick off in the heart of Traverse City, at the 63-acre-site of The Village at Grand Traverse Commons, which routinely hosts farmers markets, concerts, and celebrations.

Founded in 2008 by Sam Porter, chief executive officer of Porterhouse Presents, the festival has attracted thousands yearly to sip and socialize among more than 300 beers, ciders, meads, and wines. Porterhouse Presents is an experienced event production firm in the Traverse City area established in 2005.

What some may not know is that the festival has been dedicated to different causes from the start and has raised more than $180,000 for its partner non-profits, which address issues such as clean water, homelessness, and historic building preservation. The physical value is added by the generous serving size that guests receive after purchasing drink tickets and picking up their brews.

“It’s about the value because you go to this music festival and you get 40 ounces with a custom glass when you walk in the door,” said Porter. “Then you go through the home brewer’s line and get another 14 ounces.”

Past beer vendor lineups have consisted of microbrew all-stars such as Founders Brewing Company, Lagunitas Brewing Company, New Holland Brewing Company, and St. Ambrose Cellars. For avid brew fans who have picked up home-brewing themselves, the festival has also introduced the Home Brewers Challenge which rewards the winner with the chance to brew their winning concoction at two local breweries. 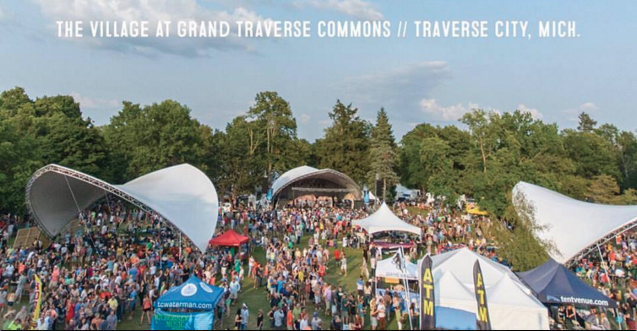 Not only is the festival a haven for brew enthusiasts, but also it is a good space to introduce oneself to the local music scene as well as some big headliners. Previous festivals have hosted artists such as the Avett Brothers, The Accidentals, and Brandi Carlile as well as other acts gaining interest in the area such as this year’s Zosa, the Ultimate Led Zeppelin Experience.

“We’ve been very passionate about craft beer, but our background is in perusing concerts and beer across the country,” said Porter. “We wanted to call it the microbrew and music festival to highlight how all of these other experiences pair with craft beer.”

Whether in town to golf, do business, or explore the Traverse City and Leelanau Peninsula’s eclectic trove of wines, beers, meads, and more, the Traverse City microbrew and Music Festival is a state-wide favorite that pairs well with all.