A West Michigan airport is making history this year in more ways than one. 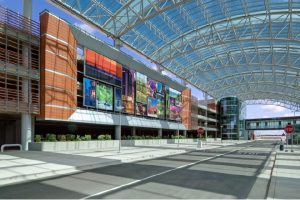 The Gerald R. Ford International Airport, or GFIA, located in Grand Rapids, announced on July 12, 2017 the airport’s consecutive ten-month period of growth continued with a record-breaking number of passengers during the month of June, which saw an increase of nearly 5.59 percent compared to the prior year period.

Jim Gill, president and chief executive officer of GFIA, stated in a press release it is only halfway through 2017 and the airport is already seeing incredible record-breaking statistics.

“This is a testament to our region, and our growing community along with our airline partnerships,” said Gill, in a press release.

For the six-month period from January through June 2017, GFIA has served more than 1.38 million passengers, which is a 6.6 percent increase from the same period in 2016. The airport also experienced the busiest second quarter in its history with more than 700,450 individuals choosing to fly Ford. During the three month period, GFIA serve more than 30,000 additional passengers than the prior year. 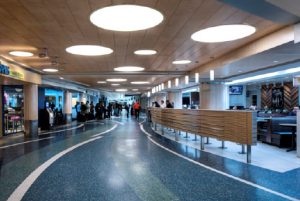 “Not only does this June go down in airport history, but 2017 now holds the title for busiest first half ever, beating out 2016 by over 86,000 passengers,” said Gill. “We hope our continued growth prompts more nonstop service, and more options for those travelers who keep supporting us to achieve these record-breaking stats.”

GFIA is considered the second-busiest airport in Michigan and served more than 2.6 million passengers in 2016 alone. On a daily basis, there is on average more than 7,000 travelers passing through the halls of the Grand Rapids-based terminals as they make connecting and nonstop flights to their destination.

Recently, the airport has invested nearly $45 million in substantial renovation and construction as part of its Gateway Transformation Project. The project comprises a consolidated passenger security checkpoint, new terrazzo flooring, lighting fixtures, pre- and post-security business centers, retail space, food and beverage options, and new restrooms. Construction initially broke ground in December 2015 and is anticipated to continue through the summer months of 2017. 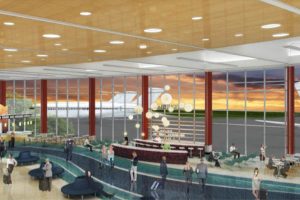 “The first phase of our Gateway Transformation Project will be complete at the end of summer, and we’re excited to see what the combination of this redesign along with the growing business in West Michigan does for our numbers,” said Gill.

With completion of the first phase anticipated for the end of summer 2017, the airport has perfectly timed its debut as a venue for the ninth annual international art competition known as ArtPrize. GFIA will not only host indoor and outdoor artwork by seven artists, but also has redefined the meaning of public art and space.

“We are thrilled to be a part of ArtPrize in more ways than one, and serving as a venue will not only give visitors a first impression of our city, but also will hopefully bring in those from around West Michigan into the airport to see the art and check out our newest facilities,” said Gill in a July 10 press release.