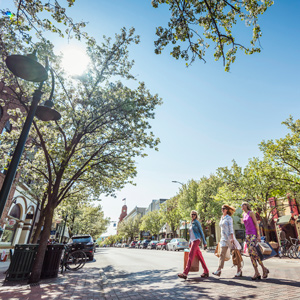 Northern Michigan has already earned its chops as a premier golf destination; boasting some of the best courses in the country. But it’s not just the caliber of golf that makes the Mitten State’s little pinky area so desirable. Sure, hitting the links designed by some of the sport’s greatest architect—such as Nicklaus, Palmer, Player and Weiskopf—is a treat in and of itself, but adding in jaw-dropping vistas and refreshing Lake Michigan breezes results in a combination that is tough to beat.

Turns out, those same stellar views and temperate climate have also made Northern Michigan one of the most popular travel destinations in the U.S. The buzz about the Traverse City area is particularly hot. Perched on the state’s Northwest coast, this idyllic city on the bay might just be the perfect combination of small-town charm and big-city sophistication.

Situated on the 45th parallel—similar to the wine regions of France and Italy—Traverse City’s Old Mission Peninsula and the nearby Leelanau Peninsula comprise more than 40 wineries. A majority of them are open year-round and offer breathtaking views of Lake Michigan’s Grand Traverse Bay.

The craft bar scene, hip and innovative, has taken root in the area as dozens of microbreweries experiment with flavors: from locally sourced honey and cherries, to pumpkins and lavender. Not to be left out of the adult-beverage category, the number of local distilleries has also grown as they malt, ferment, and age their excellent small-batch vodkas, whiskeys, and brandies.

Turning from the glass to the plate, the abundance of fertile soil and an ideal set of growing conditions have led to the sprouting of a thriving farm-to-table culinary industry. The movement has led to Traverse City’s recognition as one of America’s top 5 “foodie towns” by Bon Appetit magazine and frequent laud by super-star chef Mario Batali, who has a summer home in the area. Whether it’s a hankering for a great burger or a five-star meal, diners’ taste buds will not be disappointed by the local cuisine.

Traverse City’s charming, tree-lined downtown streets invite the shoppers in the group to visit the impressive Village at Grand Traverse Commons, which is the nation’s largest historic preservation development. The Village alone feature boutiques, art galleries, restaurants and an urban winery; while the nearby port cities of Leland, Suttons Bay, Glen Arbor and Elk Rapids are hotbeds for local artists and make perfect day trips.

But for those who simply prefer the great outdoors, the possibilities are endless. Give that golf swing a rest and try kayaking, stand-up paddle boarding or biking along miles of shoreline and through acres of hardwoods and towering pines. Or spend the day fishing on one of the dozens of inland lakes or watch the sunrise from a charter boat on Lake Michigan. It’s an experience not soon forgotten; kind of like that last double-bogey.